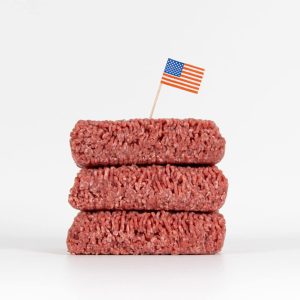 How Big is the Meat Industry in the US? The Stats & Facts

The meat industry in the United States is stepping into an exponential growth phase, according to a reputable business study. Is your business ready to meet changing market needs?

A recent study has shown that the US meat industry is entering an exponential growth phase due to some game-changing trends that emerged during the pandemic. Although the COVID-19 pandemic has challenged meat businesses with supply chain issues, the market has only shown a small decrease. This decrease came from the strictly imposed lockdowns at the beginning of the pandemic. In the second half of the year, the market quickly recovered and started to show signs of rapid growth. What’s more exciting is that the experts forecast a much larger growth, more specifically, an increase of 25% in market size by 25% by 2028.  (Source)

With these promising business trends, we decided to take a closer look at the US meat market to provide strategic insights to American entrepreneurs who help the industry grow year after year.

Why is the US Meat Industry Growing Rapidly?

The pandemic has changed consumer behaviour across many industries and the meat industry in the United States is no exception. As projected, this shift in consumer behaviour will lead to massive growth in the market. Here are the elements behind this positive change in the US and global markets:

How much meat is produced in the United States?

Although the growth trend is coming our way slowly, the meat industry has been quite consistent in terms of production output.

Overall beef production in the US is forecast to reach 27.17 billion pounds in 2022, down from 27.95 billion pounds in 2017. Total beef output in the United States has fluctuated slightly but remained fairly stable over the last two decades. (Source)

Which US State produces the largest amount of beef?

Texas, Oklahoma, Missouri, and Nebraska have the most beef cows!

To understand the size of beef production, let’s look at the number of beef cows produced in key states, in 2021(Source).

How much meat does the US export?

How much chicken is produced in US?

The poultry sector in the United States is thriving, with over 518 million chickens and 229 million turkeys in stock. Chicken production increased to roughly 44 billion pounds in 2019. Tyson is the market leader in poultry goods in the United States, with sales of over 42 billion dollars. (Source)

How much pork is produced in US?

Which country has the biggest meat industry?

The top five countries that followed China were United States of America, Brazil, the Russian Federation, and Germany). In 2020, the world’s total meat production was around 335 million tonnes.

Which Country has the biggest poultry industry?

Which Country has the biggest pork industry?

How big is the meat industry in the world?

The meat industry’s market worth is predicted to increase from $838 billion to over one trillion dollars by 2025. In 2021, the United States generated over twice as much money from meat products and sausages. Germany, the world’s second-largest meat market reached over 28 billion dollars in revenue. Russia, France, and Brazil round out the top five countries in terms of processed meat revenue. (Source)

How can Carlisle help?

Are you looking to start a business in the meat industry in the United States or maybe you’re looking to expand your operation? We are the experts when it comes to food traceability not only in Canada but also in the United States. Our decades-long experience and stable market presence make us the perfect partner that you can trust when it comes to food traceability. Contact us today and speak to one of our industry experts to understand how we can become a growth partner for your meat processing operation.

Blog: Take the Anxiety out of Recall Management Pt. 4

Mini Blog: What is Food Traceability?

How to Successfully Adopt a Data Driven Approach